I got into persona throught its music, specifically this playlist, Which i kept going back to because I got "Unbreakable Tie" + "A Lone Prayer" + "Mass Distruction" stuck in my head.

It was nearing the summer of 2020 + I had nothing better to do, so over two weekends I watched all of the P3 movies (which is pretty good, especially compared to the newer persona animes) whent "huh that was pretty sick" and during the summer watched "the movie" versions of persona 1 (psp) persona 2 Innocent Sin (psp) and Eternal Punishment (ps1) in about 2 months. which is about 40 hours overall... I did not have much to do that summer haha.
The only game i've actually played is a bit of P4... which I'm not very good at, but im having fun for the most part!

ANYWAY review/overview time!! (i'll mostly be focusing on the story, as I know little about the actual mechanics haha)

Persona 1 (Revelations: Persona, Megami Ibunroku Persona, ect) (PSP) -- what can i say, its an old game. the themeing is good though! and it sets up what the rest of the persona series is about! theres 2 main routes, Ice Queen and SEBEC, with SEBEC being the "true route." The characters are cute + I love their designs (especailly Yukino + Ayase) but its not suuuppper character driven/focused. also the encounter rate is super high. all in all its good for what it is but I've heard the Manga is better lol.

Persona 2 Innocent Sin (PSP)-- I am very upset always on the way these games where relased to the west... Anyways on to the actaul game! the characters... are very good. like all of the main cast is reaaallly good and a lot of the side characters are great. (OH also this game is the only persona game with a male love intererst + a cannon Bi player character! despite that there is a looot of transphobia w/ side characters and whatnot) I got so attached I actually cried at the ending part haha. the story is phenomenal!! the twists! the reveal! all very good. theres a lot of characters from P1 in here but you should be good w/o playing P1(?) anyways the enitre thing is 10/10.

Persona 2 Enternal Punishment (PS1) -- the PS1 translation is a bit wonky + theres some diffrences in names between the two (the main being all of P1 characters have their revilations name + masked circle is "masquerade") but its readable. the story is good AND 1st girl + adult player character heck yeah! Im a bit sad they didnt let maya continue talking but I understand why they did it. also cried at the end of this one, I got too attached to Tatsuya again :( . Anyways, also very good story (even if it is a bit bittersweat at the end)!!! + im loving the focus on adult this one has, which is unique for the persona seriers. totally recomend but play P2IN first! this is a sequel after all!

Before I forget: Heres Burning Men's Soul from Persona Trinity Soul (which I know negative information about). Simply here because I keep on thinking "I'm in the house like carpet"... Truely the song of all time. 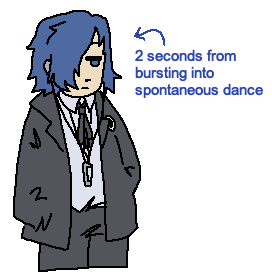